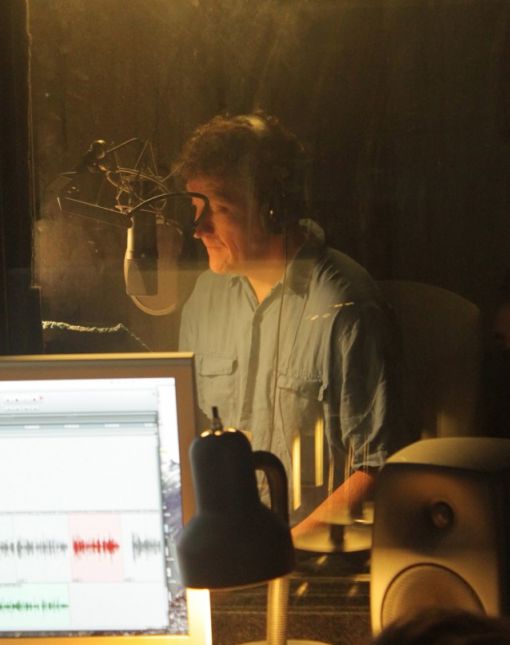 I have been recording professionally in German and English since 2006. I am a native German speaker, a baritone, and in my forties. That means that I don't get cast as the juvenile hero of anime stories anymore, as I had to realize recently. But I do get cast as a C level executive, technical instructor, narrator, middle age cop or gangster, or once, as God.

Most of my recordings are in German. As a Norddeutscher, my German is clear and very hochdeutsch. I can talk fast and precise, which really helps with technology scripts that have been translated from English to German. For timed recordings, we often find ourselves in the studio having to record a lot more German text for the original English time slot, just because the language demands more words. I can offer several regional accents and, of course, odd and funny voices.

In the last couple of years I have also been booked for English recordings. There is an increasing demand for non-American accented English, particularly for global brands, whose stakeholders abroad at times may have a hard time understanding American-English. One of my favourite studios has called this kind of pronounciation style "World English." My pronunciation ranges from slightly accented and hard to place to a full blown Bond-villain accented English (think Doofenshmirtz).

A Wealth of Clients and Studios

In addition to recording in New York Studios I have also build my own recording facility. This allows me to be available on short-term notice, even if the client can’t find studio time. It also allows me to take on longer-term projects that may not be feasible in a rented studio environment.

My home studio set up, or as I learned from the techies on gearslutz, my “signal chain” is:

It all starts in my foamy closet and ends up on JBL speakers (LSR 4326P) or on my AKG K 240 headphones. I have to admit that my wife hinted at the possibility that I may be a bit of a gearslut myself...

As alternatives to this setup, I can offer Presonus Studio One or Audacity for software, and for microphones either an EV PL 22, or, of course, my trusted SM 58 from singing (well, let's just call it that) in a rock band many years ago, in case you want me to yell a lot.

Please contact me for rates. I can recommend the services of several excellent translators if needed.

Login
© 2014 Rainer Braun. Designed by Mind Mechanics
Back to Top